Back in 2007 SportsFuzion and Allen Sportswear teamed up to provide the new inductees of the Basketball Hall of Fame with commemorative jerseys.† The jerseys were custom designed with the specific coaches in mind, the highest profile of which being Roy Williams of North Carolina and previously Kansas.The jerseys were highly appreciated and admired by both SportsFuzion as well as the coaches receiving them.† The induction aired on ESPN adding another level to Allen Sportswearís already established credibility.Roy was able to keep one of the jerseys and another version of the jersey, decorated in UNC colors and signed by Roy Williams himself, is hanging it the Basketball Hall of Fame in Springfield, Massachusetts. 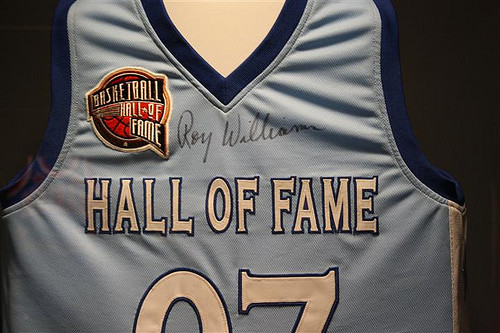